Patients with chronic pain and slow recovery rates can be challenging to treat. In combination with physiotherapy, low-intensity laser therapy can be a breakthrough solution for lasting relief from painful injuries and degenerative conditions. BIOFLEX® Laser Therapy complements physiotherapy to ensure better overall efficacy, patient satisfaction and referrals.

A Complement to Traditional Rehabilitation

By layering new capabilities onto traditional physiotherapy strategies, BIOFLEX® Laser Therapy can help you to improve patient outcomes and evolve your practice to provide a more comprehensive and diverse range of treatment options. BIOFLEX can be utilized to address post-surgical healing, musculoskeletal and neurological conditions, athletic recovery, and sports-related injury maintenance.

IS LASER THERAPY RIGHT FOR YOUR CLINIC?

Trusted by Professionals Around the World

“Since initiating treatment with the BioFlex system, I continue to experience outstanding results in being able to get our athletes back to practice and the game. I have no hesitations to give this unit my
full endorsement.”

“We have had great success treating the “itis” problems. Both patellar and plantar fascitis are responding to treatment very quickly and we couldn’t be more pleased.”

The Benefits of Low-Intensity Laser Therapy

The BIOFLEX® Professional Therapy System is approved by Health Canada for muscle relaxation, increased circulation and relief of pain, spasm and stiffness as part of treatment for an extensive range of conditions. 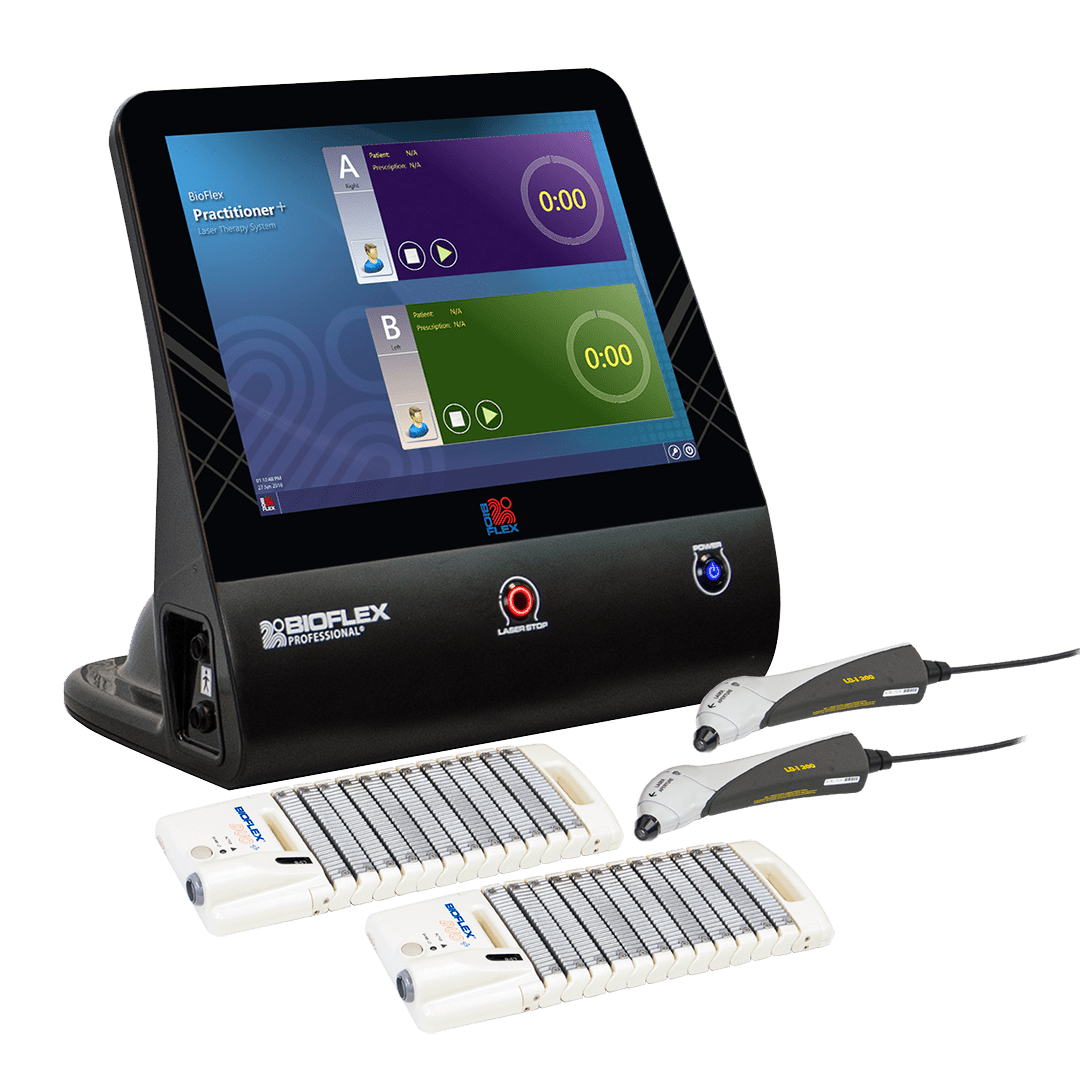 BIOFLEX® Laser Therapy Systems are designed by clinicians, for clinicians and are widely considered to be the gold standard for the industry. Since 1989, Meditech has been fully engaged in the ongoing research, design and clinically proven application of our devices. All our technology is based on extensive research, and our systems use the highest quality materials and components available today.

The BIOFLEX ownership and development team includes professionals from the fields of osteopathy, massage therapy and physiotherapy. BIOFLEX® systems are designed to safely produce precise dosages of photon particles to treat pain associated with an extensive number of clinical pathologies to achieve optimal clinical outcomes.

Learn more about our professional systems

Find out more about what BIOFLEX® Laser Therapy Systems can do to enhance your business potential with our free, monthly, live online lunchtime webinars. These complimentary, no-obligation educational events are typically 30 minutes long and offer an overview of using BIOFLEX® professional and BIOFLEX® personal therapy systems for treating various medical conditions.

Our webinars provide an overview of clinical research and BIOFLEX® laser therapy approaches to enhance overall efficacy of commonly treated medical conditions. Webinars may be CE approved depending on your profession and location.

“I give this unit my full endorsement.”

“Since initiating treatment with the BIOFLEX® system, I continue to experience outstanding results in being able to get our athletes back to practice and the game. I give this unit my full endorsement with no hesitation.”

“In my chiropractic practice, I am always looking for ways to help my patients recover faster and have an improved quality of life. After reading an article in a chiropractic journal that mentioned Meditech BIOFLEX Laser Therapy and its benefits to patients, I decided to look into the technology.”

“Six months later, we are expanding our laser clinic to twice its initial size.”

“After attending a training session, we made arrangements to purchase our first BIOFLEX unit. The response was enthusiastic, and two days after we started the laser clinic, we realized that one unit could not cope with the growing demand of our patients. We needed a second unit from Meditech. ”

“Still the demand grew with each passing day, and by the end of week four of operation, we ordered a third unit. Now, six months later, we are expanding our laser clinic to twice its initial size, with plans for operating six BIOFLEX laser units in our clinic.”

Are you ready to learn about how laser therapy can increase patient healing and referrals?

WATCH THE VIDEO
We use cookies on our website to give you the most relevant experience by remembering your preferences and repeat visits. By clicking “Accept All”, you consent to the use of ALL the cookies. However, you may visit "Cookie Settings" to provide a controlled consent.
Cookie SettingsAccept All
Manage consent

This website uses cookies to improve your experience while you navigate through the website. Out of these, the cookies that are categorized as necessary are stored on your browser as they are essential for the working of basic functionalities of the website. We also use third-party cookies that help us analyze and understand how you use this website. These cookies will be stored in your browser only with your consent. You also have the option to opt-out of these cookies. But opting out of some of these cookies may affect your browsing experience.
Necessary Always Enabled
Necessary cookies are absolutely essential for the website to function properly. These cookies ensure basic functionalities and security features of the website, anonymously.
Functional
Functional cookies help to perform certain functionalities like sharing the content of the website on social media platforms, collect feedbacks, and other third-party features.
Performance
Performance cookies are used to understand and analyze the key performance indexes of the website which helps in delivering a better user experience for the visitors.
Analytics
Analytical cookies are used to understand how visitors interact with the website. These cookies help provide information on metrics the number of visitors, bounce rate, traffic source, etc.
Advertisement
Advertisement cookies are used to provide visitors with relevant ads and marketing campaigns. These cookies track visitors across websites and collect information to provide customized ads.
Others
Other uncategorized cookies are those that are being analyzed and have not been classified into a category as yet.
SAVE & ACCEPT